Kurulus Osman Season 3 Episode 78 In Urdu Subtitles I’m fine, I’m fine. It’s gone. It’s gone. Shepherd? The shepherd, Cerkutay! Akça! Brother, brother, get up, brother. Shepherd. Shepherd, my brother. We made it to blow up in the chests of the infidels. This was also in our destiny. Bidding us farewell with our own ammunition. What farewell, brother?

What farewell? Where do you go before causing

chaos in Inegöl? I wanted this, brother Cerkutay. The conquests will be without me, but… my heart is at ease. The conquests will take place. . Brother, tell my BeyKurulus Osman Season 3 Episode 78 In Urdu Subtitles  to give me his blessing. Brother. A Turk cannot be a captive. He dies free. – I bear witness that there is no god but Allah… – No, no, no. No. and I bear witness that Muhammad (PBUH) is His servant and Messenger.

Osman’s Beylik which he rules… will be torn up like his Alps. We’re just getting started, Barkın. Osman is not dead. But he will watch the destruction of his reputation and loved ones. We told everyone who trusted them, but… Kosses and Turgut… they came despite everything. That means we don’t attack hard enough, Barkın. You won’t stop until they point their swords at each other. There won’t be a single place where they don’t get hit from. The sleeping have awoken. And they burned the Inn

with the ammunition with which they dreamed of

conquests. It will explode the moment someone walks inside. You infiltrated them like a snake, Cornelia. No, I’m just a loyal poor girl. They must have taken Mari there. The things you learned from Mari will be of great use to us. Thanks to you, we will hit Osman with his own weapon. But it won’t come to anyone’s mind. Who can harm a lonely maid who mourns her mistress? You’re going to cause a lot more pain, Cornelia. A lot. A lot. While we’re blowing up Söğüt… you’re going to plot against Gündüz.

If you succeed, everyone will believe that Gündüz

burned Söğüt so that he could escape. This will be very easy. I destroy everything, not just humans, master. Cornelia must have completed her mission by now. Kurulus Osman Season 3 Episode 78 In Urdu Subtitles Oh beautiful Cornelia. There’s nothing she can’t do. Well, what if Osman pardons Gündüz? Osman, given all these raids, cannot pardon Gündüz. He will kill him. We will reveal that Gündüz is innocent… and burn Osman’s heart. Will he kill him? If he doesn’t kill him… Kosses and Turgut will not forgive him. In that situation, they will kill Gündüz.

Barkın… those who do not join in the war, win.

We are not the ones fighting this war. We started the war. Darkness always wins. Give this poison to Cornelia. Even the most skilled healers won’t know it’s poison. It has no smell. It is not visible. We will quickly extinguish the dim light of the Oğuz. Söğüt will kneel before a dark fear.Kurulus Osman Season 3 Episode 78 In Urdu Subtitles  Whovever did this… We’ve had enemies among us before. And we struck their necks. We had enemies from outside… And we crushed them with our swords. But… but this… is a demon hiding in the dark. We will be alert. If that demon hides… 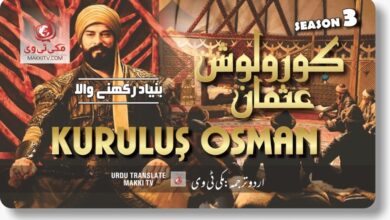